Posted by skywalker on April 13, 2012 in Uncategorized | 0 comments 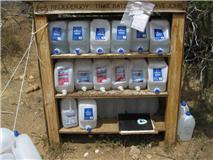 The first 703 miles on the Pacific Crest Trail (PCT) are in the desert. As you might imagine, water is the key variable. Hikers plan their days around reliable water sources and much hoped-for water caches, filled by dedicated trail angels. At the PCT Kickoff held annually the last weekend of April, trail veterans give detailed water reports to the current crop of thru-hikers. “You cannot rely on caches,” they repeatedly told us. Thus, most of us headed out into the desert with approximately 6 liters of water (about 13 pounds). Soon, however, we learned that the trail angels were so dedicated that we could count on the water caches. That relieved us from having to carry so much water. What a great tradition.

The water cache above was one of the best ones at Scissors Crossing on day four in the desert.

Bill Walker is the author of Skywalker–Highs and Lows on the Pacific Crest Trail (2010). He is also the author Skywalker–Close Encounters on the Appalachian Trail (2008), as well as his recently released, The Best Way–El Camino de Santiago.