The ‘High Sierra’ on the Pacific Crest Trail 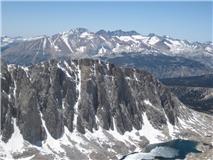 The 'High Sierra' is the highlight of the PCT

After 703 miles in the desert, PCT (Pacific Crest Trail) hikers enter the so-called ‘High Sierra’. This section traverses the highest points on the entire American mainland, including Mount Whitney (14,494 feet) and Forrester’s Pass. Most hikers consider this section the highlight of the PCT. Indeed, the High Sierra has an alpen glow, that mixed in with the daunting peaks and snow, give it a certain ethereal majesty.

PCT hikers spend much of the winter prior to their hike obsessing over snow levels in the High Sierra. The reason is that in order to make it all the way to the PCT’s northern terminus before winter, a thru-hiker must enter the High Sierra by ‘Ray Day (June 15th)’. This often means going into the Sierra at Kennedy Meadows earlier than is desirable. Thus, some thru-hikers carry ice axes, while others wear crampons.

Two other issues are critical to PCT thru-hikers. Because of the massive snow melt occurring that time of year, a PCT thru-hiker has afternoons in which he or she fords more streams than on the entire Appalachian Trail. This snow melt brings an additional problem, as well. The bugs and mosquitoes are far worse than anything an Appalachian Trail hiker confronts. Thus, thru-hikers customarily carry bug nets. They even got so bad going out of Yosemite that I began hiking with the net on.

Yes, it is daunting–sometimes even perilous. The stakes go up for a PCT hiker in the High Sierra. It is intense. But that two or three-week long stretch is honestly one of the best times of your life. The High Sierra rocks bigtime.