Snow Levels on the Pacific Crest Trail are Lower than Normal. 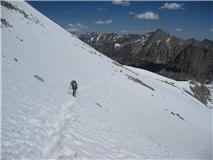 Snow levels on the Pacific Crest Trail (PCT) are one of the key variables of a thru-hike on the Pacific Crest Trail. All winter, potential thru-hikers follow various websites trying to get an indication of how much snow there is the current year compared to normal. Well, I have some good news: the California Department of Water Resources reports that snow levels are running about 80% of normal amounts.

That is very good news for all but the most intrepid of hikers. Snow can turn a hike into something more approaching mountaineering. The reason is because of what happens at mile 703 on the PCT. This is where hikers go from the desert to the renowned ‘High Sierra’, and the very highest points on the American mainland. Traditionally, hikers have tried to enter the ‘High Sierra’ around June 15th, which is known in hiker parlance as Ray Day. On years that there is a lot of snow, however, they might have to wait until the end of the month. This is highly problematic for the simple reason that you are trying to walk to Canada; a late start in the High Sierra cuts your chances of arriving before winter. But on a low snow year–such as the current one–a thru-hiker will probably be able to safely enter the High Sierra in the first half of June, leaving extra time for their jaunt up to our northern neighbor.

In my Pacific Crest Trail narrative, Skywalker–Highs and Lows on the Pacific Crest Trail,  I tell the story of  the PCT Kickoff Party that thru-hikers usually attend before beginning the PCT. “Be finished before October 1st,” veteran PCT hikers repeatedly advised. “Anything after that is borrowed time.” I will testify to that as I didn’t arrive at Manning Park in Canada until October 9th; the last couple weeks I was repeatedly buffeted by the unpredictable weather and would not like to repeat it. But unless there is a late storm, the current year’s crop of thru-hikers will be able to accelerate in the desert, enter the high mountains earlier than normal, and their chances of a successful PCT thru-hike (no mean feat) will be enhanced.