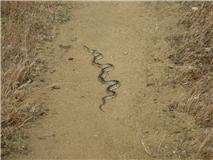 PCT (Pacific Crest Trail) hikers can expect to run into rattlesnakes at various points in the desert, which is exactly where a PCT hiker is the first 703 miles. They certainly seemed a lot more at home out there than we hikers! One thru-hiker picked up the trail name, ‘Snake Charmer’, when a rattlesnake lunged at him and bounced off his shoe.

Some tried hiking at night to avoid the awful heat of the desert. This allowed them to make good miles and save on water. But there were problems. “I hate the way you’re hiking along at night and you start hearing that rattling sound,” one thru-hiker lamented. Indeed, the desert, which is so quiet during the day, becomes much more active in the evening with not just rattlesnakes moving around, but cougars and scorpions. Fortunately, while 100% of PCT hikers see rattlesnakes (and bears later on), only about 15% see a cougar, and even less encounter scorpions. Enjoy your hike!

Bill Walker is the author of Skywalker–Highs and Lows on the Pacific Crest Trail (2010), as well as Skywalker–Close Encounters on the Appalachian Trail and The Best way–El Camino de Santiago (2011).