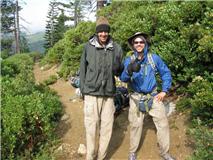 Embarrassingly, I was forced to share my hiking partner's gloves with him this cold July morning in northern California

Thru-hikers become obsessed with backpack weight. I was no different. You would understand if you tried walking from Mexico to Canada.

At the Lake Tahoe post office, I had agonized before finally deciding to send my gloves forward in the post to Washington State. It saved me two ounces–no small consideration. However, I would soon regret it. In northern California we got hit with a summertime storm, and many hikers were on the verge of hypothermia as we cleared 10,000 feet. My hiking partern, Miles, noticed I was suffering. He was kind enough to offer up his gloves. But soon he was in the ringer himself. “Skywalker,” he asked embarrassingly, “do you mind if we share those gloves?” Of course, if I had been man enough, I would have insisted he take both of them back. Instead, I halfheartedly offered to give them back. We agreed to share them, as this photo shows.

Perhaps this was a case of me getting mileage greedy by cutting it too close on backpack weight.

Bill Walker is the author of Skywalker–Close Encounters on the Appalachian Trail (2008), Skywalker–Highs and Lows on the Pacific Crest Trail (2010), and The Best Way–El Camino de Santiago (2010).