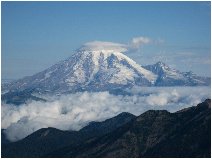 The forbidding eminence of Mount Rainier

Mount Rainier in Washington state is the highest mountain in the northern Cascades. The Pacific Crest Trail skirts Rainier; but fortunately it does not cover the summit of the peak. That would be flat out dangerous given that Rainier is a so-called ‘technical climb’, requiring crampons, ice axes, and more. Periodically there are deaths on Rainier, almost always having to do with sudden weather change. Further south in Oregon, PCT thru-hikers also skirt Mount Hood which is a similar technical climb.

Altogether, the Pacific Crest Trail is in the Evergreen State for a total of 500 miles, and it is an eventful one. Further, thru-hikers are usually racing to get to the Canadian border before October 1st and winter weather.

Bill Walker is the author of Skywalker–Highs and Lows on the Pacific Crest Trail (2010). He is also the author Skywalker–Close Encounters on the Appalachian Trail (2008), as well as The Best Way–El Camino de Santiago (2012).