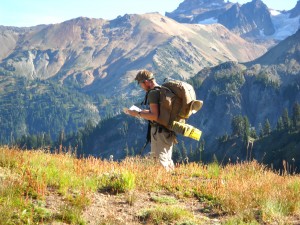 The Pacific Crest Trail (PCT) passes directly through Yosemite National Park. I had never been to Yosemite before. The Yosemite world of sheer rock cliffs and running, plunging water staggers the imagination. Waterfalls were seemingly everywhere.

Most PCT thru-hikers took a day off and toured Yosemite Valley. This area had been preserved a century back when John Muir had convinced Theodore Roosevelt to include Yosemite Valley as a protected national park. It was early July and Yosemite Falls, the largest waterfall in America at 2,425 feet, was dumping water off a rock monolith into the valley. A couple PCT hikers illegally climbed up Half Dome at night and slept up there (not recommended!).

When we returned to the PCT, agony was mixed in with our ecstasy. The scenery was ethereal, and enough to see how Muir was so utterly captivated. However, PCT hikers pass through the High Sierra and Yosemite during the early summer when the snow melt is at its greatest pace. What that means is truly horrific bugs. Fortunately, I had bought a headnet. I would never believe I would end up eating, and even hiking, with a headnet on. But it was a no-brainer–absolutely essential the bugs were so ferocious. And our backpacks were bulging from the bear canisters which are required by law for hikers (supposedly for the bear’s protection, as much as the hikers).

Nonetheless, by the time I had exited Yosemite it was far and away my favorite national park–a priceless piece of Americana.