Posted by skywalker on April 21, 2012 in Uncategorized | 0 comments 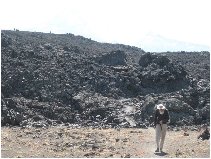 Oregon is the anti-Florida. Let’s face it: when people retire to Florida, they are more often than not pursuing a sedentary lifestyle. I had never been to Oregon until I hiked the Pacific Crest Trail (PCT). I was blown away by what I saw.

Oregon’s culture is decidedly outdoor-oriented. The kind of people who move there are gung-ho on an array of outdoor activities, ranging from mountaineering, sailing, and kayaking, to all team sports. And, of course, the state is famous for its runners (and the home of Nike).

This came as a great welcome to me on the PCT. A PCT hiker gets plenty of solitude; but sometimes it gets a little spooky when you go for days (the desert for example) without seeing a soul, other than perhaps a fellow PCT thru-hiker. It was nice in Oregon to see so many locals out for treks of various distances.

The PCT in Oregon goes right over various exploded volcanoes, and around the rim of Crater Lake, the deepest lake in the United States. The CCC lodge built overlooking Crater Lake is extremely well done and the trek on the Rim Trail around the lake is one of the highlights of the PCT. Further up in Oregon, the PCT skirts the highest mountain in the state, Mount Hood. Thru-hikers took the opportunity to visit famed Timberline Lodge (scene of the film, ‘The Sining’), and eat the buffet for $16. Believe me, they lost money on us and deserve credit for even allowing hikers to eat the buffet.

So that is why hiking is the best way to travel. You get to see a place in its entirety and meet its people in authentic situations. And what I learned in Oregon told me it has a special brand of northwestern magic.