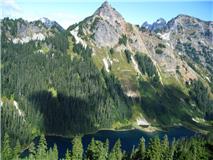 The Pacific Crest Trail (PCT) is 2,663 miles long, and runs from Mexico to Canada. Unsurprisingly, it passes through several distinct regions of geography. First, of course is the desert (including part of the infamous Mojave). Many hikers’s dreams of thru-hiking cratered right there in this implacable milieu. Next, came the majestic High Sierra. This stretch of about 400 miles is often the most beautiful place a thru-hiker has seen in his or her short, or long, lives. The Sierras have a certain alpen glow and ethereal majesty about them. Hikers often camp above 10,000 feet.

In Oregon, PCT thru-hikers pass around and through various exploded volcanoes. Often it is completely flat, but with heavy sand on the surface as part of the long-ago fallout.

The PCT wraps up in the Northern Cascades. This rugged region has an almost bleak wonder to it. The overwhelming feeling is one of isolation. Unsurprisingly, the region has bred some hardy souls. PCT thru-hikers pass through Snoqualmie, Skykomish (the Dinsmore Hostel), and Stehekin, which lies on Lake Chelan. At the PCT Kickoff, hikers are advised to be finished before October 1st. That’s good advice. But I wasn’t. Thus, the cold autumn weather in the Cascades lay front and center in my mind.

Nonetheless, this is a great way to finish this national scenic trail. Indeed, the rugged bleakness of the northern Cascades have a unique feel to them that still abide in me. That is the eternal sign of a fruitful journey.