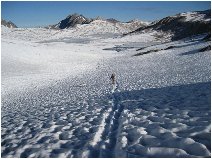 Muir Pass on a July Day

The John Muir Trail (JMT) is 219 miles long. It runs southbound from Yosemite Valley to Mount Whitney, and takes most hikers about 15 days to do. Thus, a person with a fulltime job still might be able to do the JMT. Personally, I think it rates as the greatest short-to-medium distance hiking trail in the United States. In fact, it covers the very most gorgeous parts of the Pacific Crest Trail, running through the High Sierra.