Woo-hoo!  It’s opening day at Hiker Heaven, and there are two hikers in da house!  Volunteers Shelly Skye (aka Upside Down ’12) and Mike Shostak (aka Clutch ’12) have already made a big dent in preparations.  Cucumber Boy and Three Gallon (’07) donated a 27′ RV that will be used for volunteer housing.  There are so many amazing ways to “Serve The Herd!”  I am so grateful and full of anticipation for another incredible season!

I saw the above post on Facebook this morning from Donna Saufley of Hiker Haven, and it immediately got the juices flowing. It also immediately reminded me of a discussion I had with Donna while staying there during my 2009 PCT thru-hike.

“They need to discontinue the Kickoff,” she said vehemently.

Point well taken. Predictably,  a hiker’s viewpoint is different than that of a hostel owner. And this ain’t just any ol’ hiker hostel. The Saufleys have the most well-attended, well-run, critical hostel on the entire 2,663 mile Pacific Crest Trail. It’s right in the middle of the desert, far from the previous stop. Hikers are desperate for a respite after a long, dry, often morale-sapping stretch in the desert. So the Sauffleys are perfectly located.

Donna is a strong personality and has developed a state-of-the-art packaging system to handle the seemingly infinite hiker demands for equipment changes and the like. Her limit is 50 hikers; in 2009 she had to turn some hikers away b/c of overcapacity. It visibly bothered her and thus her attitude about the annual Pacific Crest trail Kickoff Party. The above post indicates she may have changed her attitude about it. Let me just say, I haven’t changed my attitude one bit about either the Kickoff Party, the Sauffleys, or the Andersons.

A PCT thru-hiker is bound to spend a lot of time alone on the PCT, both in the day and evenings. Much more so than on the Appalachian Trail. To be sure, solitude is part of the bargain on most any long-distance hike. But the morale boosts, the feeling of being part of something larger than just a footpath in the desert or mountains, the rich community–these aspects of the PCT cannot be overrated. And I’m here to say that all through the rest of the journey–in northern California, Oregon, the northern Cascades, we hikers relentlessly relived some of the more entertaining moments we experienced on the PCT at the Kickoff, the Sauffleys, and the Andersons. They play a critical role. Yes, it is a crush. But wow, it was fun; the impressive thing is how the PCT has developed its own rich community, despite being much more isolated than the AT. It is an epic achievement, and one that all the hostel owners, trail angels, and the like can be very proud of.

That all having been said, indications are that more people will take to the PCT this year than ever before. My call to the Pacific Crest Trail Association (PCTA) revealed that–other than for thru-hikers–the Kickoff this year (April 26-28) is now fully booked in Lake Morena County State Park. Besides all the food served up, ex-hikers will give seminars on topics as diverse as water reports in the desert, snow levels in the High Sierra, ice-axes, and bear canisters.

Perhaps the ‘Cheryl Strayed Effect’ is taking hold. Miss Strayed, of course, is the author of the fabulously written and popular PCT narrative, Wild, that has been on the New York Times bestseller list for the entire last year. One is tempted to compare it to the ‘Bryson effect’ on the Appalachian Trail and the ‘Kerkeling’ effect on the Camino de Santiago. Those two authors, Bill Bryson and Hape Kerkeling, wrote bestsellers (A Walk in the Woods and Ich Bin Dan Mal Weg)on their respective journeys that significantly ratcheted up the population of hikers on the AT and Camino de Santiago. My hope (remember, our country has a 30% obesity rate) is that Cheryl Strayed’s book does the same. Anything that gets people outside is a good thing.

And there simply is no better ‘outside’ than the PCT. From the desert to the high mountains, it is the greatest journey possible for an average person such as myself. Those of you who have read my PCT narrative, Skywalker–Highs and Lows on the Pacific Crest Trail, will recall a photo (that my mother begged me not to put in the book) when I was down 35 pounds. “You look scary,” one of my hiking partners said when she saw me with no shirt on. I ultimately lost 43 lbs. and it would have hemorrhaged even more had I not been saved by high-calorie olive oil. Yes, the whole thing is a struggle. And struggle ain’t always fun–but it’s ultimately a lot better than fun.

So yes, the Sauffleys, Anderson, and others have their hands full. It has been a low-precipitation year and the trail angels are going to play an especially critical role in stashing water caches in the desert. But it is the journey of people’s lifetimes and the more people out there, the better. Let the masses go forward.

Bill Walker is the author of Skywalker–Highs and Lows on the Pacific Crest Trail. He is also the author of Skywalker–Close Encounters on the Appalachian Trail, The Best Way–El Camino de Santiago, and Getting High–the Annapurna Circuit in Nepal. Walker, who is nearly 7-feet tall, is currently working on a book on the subject of height. 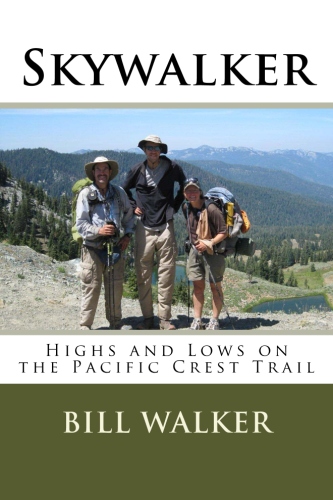