Skywalker: Highs and Lows on the Pacific Crest Trail 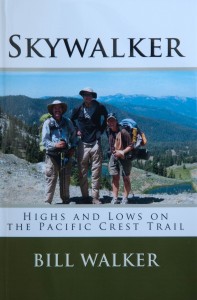 The Pacific Crest National Scenic Trail (PCT)is the perfect place for an average person to do something extraordinary. Bill Walker (“Skywalker”), who stands 6’11”, might seem like anything but average. Yet in a brutally honest tone, he lays to bare all his considerable weaknesses and fears. Among these are crushing weight loss and fatigue, along with a fear of getting lost or a bear stealing his food. Nonetheless, he is bound and determined to hike the PCT, which at 2,663 miles, runs all the way from Mexico to Canada.

The PCT’s calling card is its stunning beauty. It has a diversity of geography unequaled by any footpath in the world. Haunting and beckoning the PCT hiker are the implacable desert, the towering majesty of the so-called High Sierra, and the ruggedly bleak, northern Cascade range. Indeed, the PCT hiker faces much greater extremes of terrain and climate than on the famed Appalachian Trail. Completing this demanding challenge calls for overwhelming clarity of purpose.

Walker’s signature characteristic as a writer is his real talent in capturing people (“Skywalker’s humor, his delight in human foibles appeal to a broad audience.”–Jeff Minnick, Smoky Mountain Book News). Obviously, he is a people person because he runs into and vividly describes a truly colorful cast of characters from seemingly all walks of American life. Among these are Uber Bitch, Shit Bag, and Serial Killer; the reader learns how these hikers ended up with their names (hint: blunders). The reader need not worry that Walker is a bully. Throughout this irreverent narrative, he turns his considerable supply of humor back on himself in ruthlessly self-deprecating fashion. It all makes for a delightful read.

“It has now become a virtual rite of passage, once having completed the Appalachian Trail, to immediately begin thinking about attempting the PCT.”

“It was a brilliant pageantry of clean, well-fed, well-hydrated hikers in the desert best that bounded out of Lake Morena County State Park in the southern California desert with such high hopes. Of course, many had already picked up colorful trail names ranging from Heartless Bastard, to Helen of Troy (well, nice try anyway!), to Serial Killer.”

“She was hot. Okay, everybody’s hot in the desert, right? No, she was the real deal. Great figure, million dollar smile, a southern accent to make you want to swallow your heart, and–it also seemed like–cool as hell. I had seen her razzing around at the Kickoff (who hadn’t!), and wondered if she was a hiker or a partier. She was both.”

“Patience was not my forte in the snow. I habitually hurried in these situations. Snow, rocks, hurrying, and very long legs are a recipe for getting bitch-slapped up against the rocks.”

“The idea of a gift to yourself sounds inherently narcissistic. But by immersing myself in such indescribable beauty for the last few weeks in the High Sierra, I honestly thought I had given myself one of the great gifts of my 48 years.”