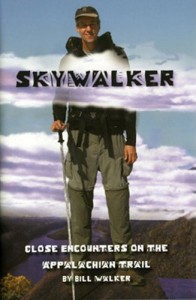 Why would a middle-aged businesman who had never even spent a night outdoors attempt to hike the entire Appalachian Trail in one year? Bill Walker, a former commodities trader in Chicago and London, and an avid walker, had developed a virtual obsession to hike this 2,175 mile trail in one hiking season. So in the spring of 2005 he set off, determined to hike this Georgia-to-Maine wilderness trail before the arrival of winter. Immediately, he realized he had plunged into a whole new world. For starters, the Appalachian Trail has some ferociously difficult terrain, winding through dramatically diverse geography and covering the East’s highest peaks. Walker’s height of almost 7 feet earned him the trail name, Skywalker, and drew envious attention from fellow hikers. However, that same height made him more susceptible to weight loss, cold weather, and crushing fatigue. An elemental fear of bears and snakes, as well as getting lost, also loomed large. Along the way, Skywalker had the good fortune to meet an amazingly rich cast of characters from all walks of life who were also pursuing this grueling quest.

The Appalachian Trail has developed a remarkable culture over the years. Included is a history of how it has become such a stunning success story. No other country has a footpath remotely as diverse or popular as this, and up to five million people per year now take to it for hikes of varying duration. Robert Frost once wrote, The woods are lovely, dark, and deep. Skywalker learned how utterly true that is as he experienced an epiphany about the outdoor life in general. Mortals are compelled–or perhaps cursed–to relive their lifetime adventure. This is Bill Walker’s (Skywalker’s) unforgettable version, leavened with ruthlessly self-deprecating humor. His fondest hope is to inspire others, as new to this whole world as himself, to give the Appalachian Trail a try as well.

“The idea of thru-hiking the Appalachian Trail haunted and beckoned me. If I tried it, I would be taking on–in my mid-forties–a challenge on a vastly different scale than anything I had ever attempted.”

“From its inception the AT has been a model public-private partnership. The Appalachian Trail is an American success story.”

“One way or another, the big investment of time and money–along with the huge energy and emotional investment–makes an AT thru-hike attempt a big part of anybody’s life.”

“Wilderness is indeed one of God’s greatest gifts to humankind, but its essential wildness-even savageness–should not be underestimated.”

“Hiking in Maine was an exotic brew of exhilaration and fear. But absolutely no money can buy the adventure and freedom it offers.”